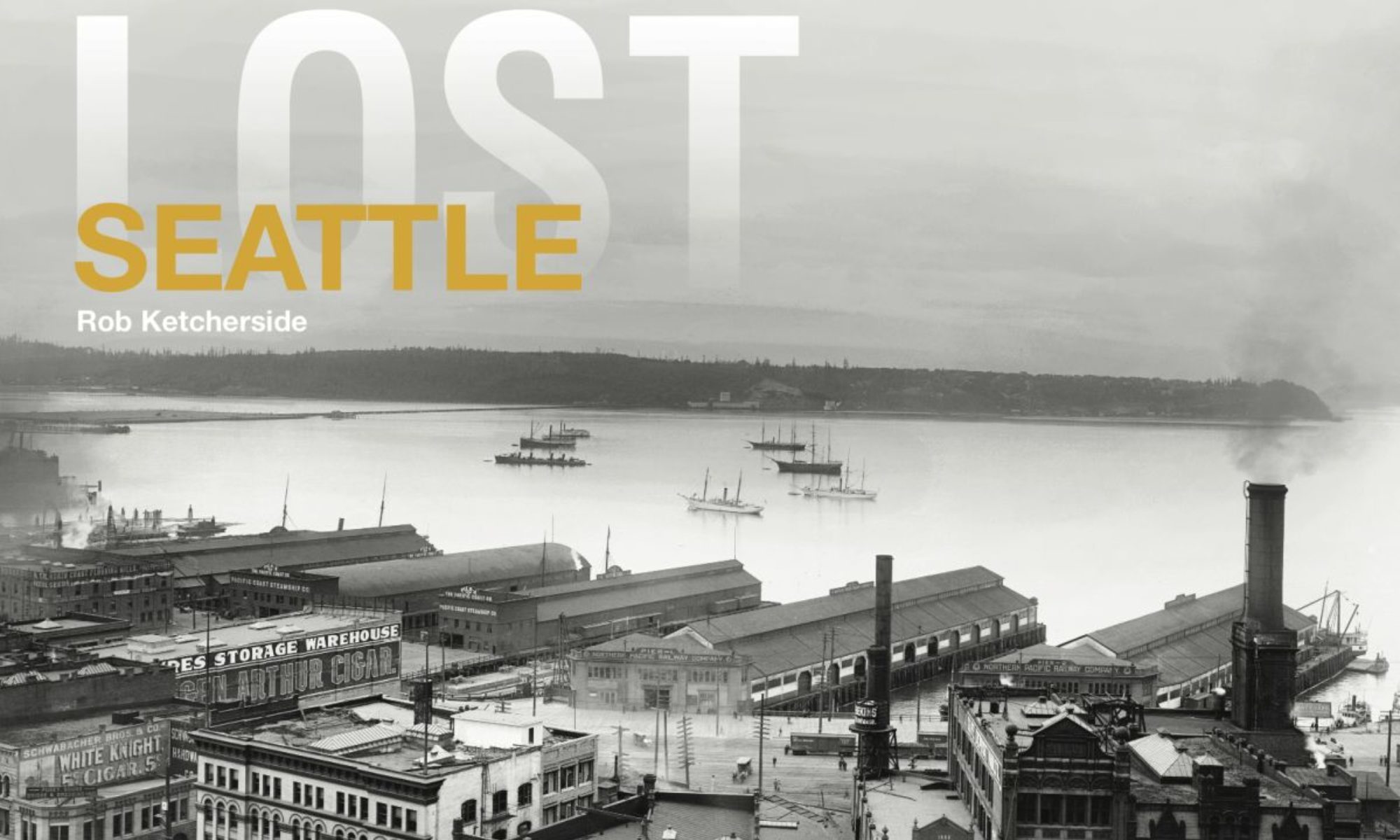 This page contains additional material for my book Lost Seattle.

Pick it up at from your local bookseller. In my neighborhood that would be Elliott Bay Book Company. It’s also available on Amazon or before Christmas at Costco.

Lost Seattle was published in 2013 by the Pavilion imprint of Anova Books out of the UK. It was is by Trafalgar Square and the Independent Publishers Group. My book was on the first page of Trafalgar Square’s 280-page Fall 2013 catalog.

The images in the book were selected by me and come from a variety of places. One was taken by my grandfather. A few were taken by me. A good chunk come from the Seattle Public Library, particularly their collection of images taken by Werner Lenggenhager. Many of the SPL images were scanned for the first time for this book. The Seattle Municipal Archives provided many as well as the Washington State Library, Museum of History & Industry, University of Washington Libraries, Library of Congress, and National Archives. A number of private individuals allowed use of photographs – Paul Dorpat of course, also Koji Kanemoto, Don Bugh and Joe Mabel. Plus a host of individuals, some only with pseudonyms, who placed images on the Internet with explicit free use.

One of the best features of the Lost series also ends up being a weakness. The sites, businesses and events are sorted by date of loss. It allows for a very interesting view into the change that was underway and how it sometimes came in bunches. But after one end-to-end read, it becomes difficult to quickly find one of the topics. There’s a fine index, but it would be great to have an alternate table of contents, for example sorted alphabetically.

I’m going to do one better than that. Below is a searchable, sortable list of the contents of Lost Seattle.

The cover was purchased from Corbis Images, who resold a cleaned up version of a Museum of History & Industry archival image. That was taken by Seattle photographers Ira Webster and Nelson Stevens in 1905 or 1906. They were standing on top of the Alaska Building (now a Courtyard by Marriott hotel), and it was the left part of a panorama of Seattle’s waterfront.

The birds eye map on the inside cover came from the Library of Congress. It was drawn in 1891 by Augustus Koch with the full title “Birds-eye-view of Seattle and environs King County, Wash”. This is a rights-free document available as a massive TIFF that you can make bed sheets out of.

On the back cover is another great birds eye view, this one from 1878 by A. L. Bancroft titled “Bird’s eye view of the city of Seattle, Puget Sound, Washington Territory”. It’s also from the collection of the Library of Congress. The TIFF isn’t quite as large, and might be better for pillow cases or table cloths than bed sheets.

Here is a partial a map of sites, neighborhoods, and events described in Lost Seattle. It currently goes through 1910.

This is a list of all known errors. They’ve all been corrected by the third printing. Please drop me a note to roket swirly gwu.edu if you find another one or have questions about any content.

The first few errors were corrected in the second printing:

1) Bad math in King County Courthouse. In the opening to the essay I say that the courthouse was an icon for 70 years. But if you do the math of construction starting in 1890 and demolition in 1927, it was only there for about 40 years.

2) Incorrect archive date in Mosquito Fleet. The caption for the main image says that it was taken in 1900. The Seattle Public Library has that on in their database (or they will until I email them). But the ferry is clearly carrying a huge crowd of visitors to Luna Park. So this must be between 1907 and 1913.

3) The top image on page 108 is incorrectly attributed to me. It was used from the Flickr account of Capitol Hill Seattle Blog’s Justin Carder. It appears to have been taken by Central District News writer “scott”, but it’s not clear to me now. At the time of writing I simply thought it was by Justin and rights-free. I assume that there are more errors in photograph attribution, and I hope to put together sortable, searchable list with corrections in the near future.

The following errors were corrected in the third printing:

4) Got the name of a Sonics legend wrong. On page 131 Lenny Wilkens is referred to as Larry Wilkens.

6) The image on page 74 of the First Federal Building is incorrectly attributed to the Seattle Public Library. It actually came from the University of Washington Libraries.

7) The photograph on page 101 should be attributed to Paul Dorpat instead of Seattle Municipal Archives. While it is very similar to a photo in their collection, this was taken from a blog (linked below). My publisher suggested the change amidst a broader discussion and I missed it.

8) Seattle Municipal Archives is credited with photographs on pages 106 and 107. That should read 104 and 105. 107 was actually Corbis. 106 has two photos; the left came from Wikimedia (apparently attributed to Anova Image Library as 104 left), while the right came from Seattle Public Library (attributed as 104 right).

9) The photograph of the Golden Potlatch that appears with the Introduction was actually taken in 1911. The Washington State Archive has this incorrectly labeled as 1912. Two of the clocks in the photo were moved to 2nd Avenue in earl 1912, long before the summer festival.

10) The photograph of Pike Street in the Streetcars article on page 59 top was from the Washington State Archives’ King County Metro collection.

11) Both photographs on page 91 in the Elks Club article were taken from volume 12 number 1 of the journal The Architect. From the Internet Archive.

The following errors have not yet been corrected:

The below table is a sortable list of images in the book. It is currently incomplete and only lists images from the Seattle Public Library, Seattle Municipal Archives, University of Washington, and Washington State Archives.

I was lucky enough to be invited to the following author events for Lost Seattle: